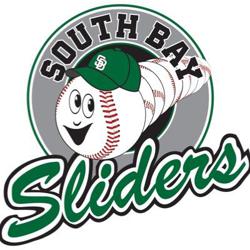 The South Bay Sliders are derived from the defunct Slippery Rock Sliders of the Prospect League, where Baseball Club Long Beach owner Jonathan Rodriguez coached for two seasons. The Sliders look to bring an exciting brand of baseball to the South Bay and hope the baseball rich tradition of the area can help the Sliders franchise become one of the best summer teams in the country.

The Sliders look forward to an exciting first year as a franchise and look to grow with the Sunset Baseball League.

The South Bay Sliders will play their home games at El Camino College.

All six teams are alive

The first regualr season of the SBL has enjoyed a lot of success and it will come to a thrilling culmination this week. Each and every team is still in the playoff race and hungry to establish their footprints on the inaugural SBL championship trophy.

The Solana Beach Cardinals (13-8) lead the south division. SBL all-star Niko Holm (Palomar College) leads the team with a .433 BA. The Cardinals have four games remaining on the docket all of which will be played on the road. They travel to Jackie Robinson Field Tuesday to play the Arroyo Seco Saints. On Thursday, they have a game against the OC Surf and they finish their season Friday with a doubleheader against the Inland Valley Pirates.

The Inland Valley Pirates (10-8) are fresh off a doubleheader sweep of the North-leading Signal Hill Oilers on Sunday afternoon. The Pirates are led by Brennan McKenzie (Cal Poly Pomona), who is hitting .380 on the season and enjoyed his best week to date finishing 6-for-10 with a home run, six RBI, two runs scored and a stolen base just for good measure. Zach Cooper, Nick Cordoba, Landon Marshall and Aaron Torres have all contributed as well, each batting higher than .300. Jake Geck has become a force to be reckoned with logging the most innings of any Pirate pitcher and earned a victory Sunday, while just allowing one run. Aaron Bernal has been a lights out reliever as well. Inland Valley has a grueling final week with seven conference games to be played in five days from Tuesday through Saturday. They face the OC Surf next on Tuesday at 4:30 p.m. at Valencia High School.

The OC Surf (10-9) split a doubleheader with the Arroyo Seco Saints on Sunday. Phil Steering (Hawaii Hilo) won the SBL player of the week with an astound 13-for-20 week at the plate including seven runs scored and six RBI to go along with three homers. Luke Hussung (Concordia) continues to lead the team in batting with a .385 clip. Anthony Sommer (UCSD) has become the ace of the staff with a 2.11 ERA. The Surf play six league games the final week of the season including four against the Pirates, one with the Cardinals and one against the Oilers.

In the north division, the Signal Hill Oilers (10-11) still lead, but just by 0.5 games after strugging to a 2-5 record last week. The Oiler offense has still been on fire as eight players are hitting .300 or better. Bobby Vasquez (Santa Ana College) is hitting an incredible .391. Alex Baez has been electric on the mound all season with a 2.90 ERA and (3-0) record in his 31 innings of work. Signal Hill has four games left: three against the Sliders and one against the Surf.

The Arroyo Seco Saints (9-12) have closed the gap behind not just the Oilers, but the rest of the league in general as they try to work themselves into a playoff spot. Jeremy Conant (Pasadena City College) leads the team in batting average (.333) and RBI (10). Race Gardner (Azusa Pacific) has been the Saints best pitcher with a 3.11 ERA in 17.1 innings of work. The Saints have four remaining games: two against the Sliders, one against the Pirates and one against the Cardinals.

The South Bay Sliders (8-12) have won five of their past seven games to get themselves back in the hunt for a playoff spot, but still have work to do in the final week of the season. Andrew Shults (Grinnell College) has a .361 BA. Jake Sahagian leads the league with 21 RBI. The pitching staff has been instrumental in their recent success as the likes of Scott Savage (1.84 ERA), Walker Marks (1.64 ERA) and Charles Carr (2.31 ERA) have been shutting down the opposition. The Sliders have five league games left: three against the Oilers and two against the Saints, which means they actually control their own destiny to make the playoffs should they win out.

It's certain to be an exciting final week of the season, so be sure not to miss a second of it!

Andris Rizquez was named the MVP

The South defeated the North in a high scoring 11-9 ballgame Wednesday night at Cal Poly Pomona.

The star of the night was Andris Rizquez (Lewis & Clark), who went 4-for-4 with two doubles, four RBI, one run scored and one stolen base. The OC Surf outfielder was named the first ever SBL all-star MVP.

The North jumped out to an early 4-0 lead in the top of the first inning as six of the first seven batters got hits. Spencer Rouse (Saints) and Vincent Byrd Jr. (Oilers) had the two RBI knocks and also each scored in the inning.

The South answered with two in the bottom of the first. Luke Hussung (Surf) continued his tear with an RBI single and Niko Holm added an RBI ground to cut the deficit in half to 4-2.

The South cut the deficit half again in the second scoring one run on an RBI single by Jason Bush (Surf).

The South took a lead they wouldn't relinquish in the third inning when Rizquez came through with a bases clearing double to make it a 6-4 game.

The South put up another three-spot in the fifth to increase the lead to 9-4. Alec Petrone (Pirates) had an RBI single.

The North trimmed the margin to two in the sixth as Jake Sahagian (Sliders) had an RBI and Connor Underwood (Sliders) cranked a two-run double.

Andrew Wilson's (Cardinals) RBI single in the bottom of the sixth made it 10-7. The South tacked on another run in the seventh when Charlie Verrone (Pirates) came home to score.

At the midway point through the season, the Sunset Baseball League is as competitive as any league across the nation.

Only 1.5 games separates the three teams in the South.

The Solana Beach Cardinals have a narrow 0.5 game lead in the division at 8-5. Kit Larson has been the ace of the staff, and one of the aces of the league. The NC State senior-to-be has a microscopic 1.12 ERA, while only allowing two earned runs in his three league starts. Fellow SBL all-star Cole Mueller (UCSB) has led the way offensively with a .435 BA. Solana Beach will open the second half of the season with a highly anticipated two-game series against the North Division leading Signal Hill Oilers. The teams will meet at Long Beach City College for a 5 p.m. game on Friday followed by a 1 p.m. game on Saturday at Torrey Pines High School.

The Orange County Surf are only 0.5 games back in the south. Former SBL player of the week Luke Hussung (Concordia) has been crushing the competition. Hussung is hitting at an incredible .451 clip and leads the league with hits (32), runs scored (17), RBI (16) and stolen bases (11). Payton Lobdell (Hope International) has excelled on the mound. Lobdell has a 1.40 ERA in 25.2 IP with 17 strikeout victims. His most impressive performance was the complete game shutout he twirled in Santa Barbara against the Foresters. The Surf's next league game won't be until July 10 when they play a doubleheader against the South Bay Sliders.

The Inland Valley Pirates are just 1.5 games back after a rough finish to the first half of the season getting swept in doubleheaders by the Cardinals and Oilers on consecutive days. All-stars Brennan McKenzie (Cal Poly Pomona) and Landon Marshall (Panola College) have been the two big bats for the Pirates. McKenzie has a .353 BA, while Marshall is hitting .341. Breion Barron (San Bernardino Valley) has done double duties with two home runs on the season and also leading the pitching staff with 19 strikeouts in just 15 innings of work. Inland Valley plays the South Bay Sliders in a two-game set on Friday and Saturday.

In the north, the Oilers sit atop the standings. Reese Berberet (Long Beach City) leads the team with a .385 BA and 8 RBI. All-star Joey Loranger (Cypress) has been the horse on the mound tossing 21 innings with 17 strikeouts.

The Arroyo Seco Saints are second in the division. Max Warren (Kenyon) leads the team with a .400 batting average. Brandon Louie (Claremont McKenna) has 10 strikeouts in 11 innings and has earned two victories.

The South Bay Sliders are in third, but only sit three games back of the final playoff spot. Reese Alexiades (Pepperdine) boasts a .327 BA. Charles Carr (Grinell) has been the ace pitching 27.1 IP with 16 strikeouts and a 2.30 ERA. Carr's best game came against the Humboldt Crabs when he earned the victory tossing 8.1 innings, striking out seven and only allowing one earned run.